First up, I had a blast. I have never run in any sort of event before (minus middle school track, which I really hope doesn't count ;-)), & just being there with the music & crowd was a ton of fun. It was a little tricky logistically to be on my own & have to carry my keys, etc. I was also really sad that I didn't have anyone to hold a warmer coat for me while I was waiting for the race to start or to cheer when I came through the finish area, but I survived. It was just under 40 degrees & I was there for about an hour before we started to run & I was COLD.

I was wearing gloves, but all of my fingers were white & then eventually purple. When I started to warm up (about a mile in), my fingers started to hurt. I also felt like my legs were bricks of ice for about the first mile, but eventually hit a good stride. The first 1/2 mile was slow as people were adjusting their pace, I was dodging folks with dogs and strollers, etc. I pushed myself hard & I think I could have come close to 30 minutes if I had had a better first 1/2 mile. There were more hills than I expected, and the last hill (I think it was between 2.75 miles to the finish) was especially painful. I listened to Club Can't Handle Me Right Now, on repeat, about three times the last stretch. Rock on! :-) My Garmin said I ran 3.27 miles, and quite a few folks were saying the course was a little longer than it was supposed to be. I'm still waiting for my official time, but my Garmin said I finished it in 32:26 minutes. Regardless, I'll take it.

The race was a little crowded, but I have no idea what's normal, as this is the first race I've ever been to (as a spectator or runner). There were a few stands after the race, and Starbucks was giving away coffee & mini vanilla scones. Yum! They also had bananas, oranges, water, & mini Clif bars. Qdoba was also giving away free tacos, but I couldn't hang with that idea at 9:00 am. I did see quite a few people putting them down, though. There was also a kids race after the 5K/10K, and I'd love to take the boys next year if they're interested.

Now I am researching 10Ks. I would love to do a 10K before my 1/2 marathon in July, & I feel like I could have done more today. Not a full 10K of running, but I do feel like I had more gas & I wasn't as exhausted as I expected.

Overall, I loved it & I'll definitely be running in races again. I had basically no knee/ankle/shin pain today, so I'm extremely grateful for that. I'm kicking off my 1/2 marathon training next week, as the 1/2 is in 13 weeks. Yeah!

I woke up at 5:30 (race started at 8:15) so I could eat breakfast (peanut butter toast) & hydrate with enough time to not pee my pants on the run. Mission accomplished, which is something I was really worried about on my pre-runs. :-) Me, looking a little tired around 6:00 am. 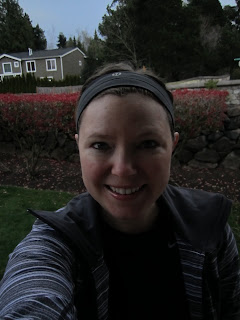 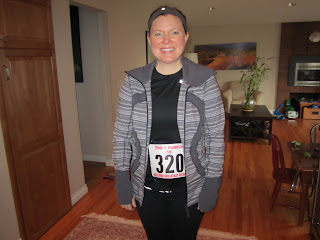 Still waiting for the race photos, but I'll add those when I have them.﻿
Posted by Running Girl at 6:39 PM