The course was much hillier than I'd expected. . . see below 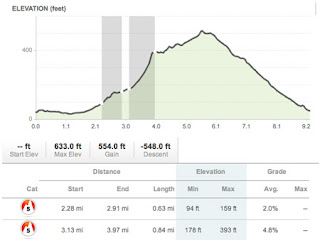 Let's just say that the incline was solid & lasted for miles between 3 & 6, I think. Although, honestly, that part is a blur. It's like child birth - I've already blocked out the super difficult part, because it was all 100% worth it in the end. The great news? once we peaked, it was downhill for the final miles & I felt like a million bucks. The smile on my face when I crossed the finish line lasted *all day*. :-)

Before the race:
Backing up a bit, I woke up at five to eat a package of oatmeal mixed with almond butter that I'd brought (surprisingly good), a package of Starbucks VIA  instant coffee (not so good, but did the trick) & hydrate, as the race started at 7:45 am. Well, it was supposed to. Unfortunately, a train was running behind, & the course goes over the train tracks, so we had to wait. It was incredibly cold, so the 40 minute delay was sad times. My fingers were swollen, & my lips were purple until about two hours after the race.

During the run:
I took a couple of shot blocks during the run, & only walked through the water stops, making this by far the best run I've ever had. Ever. Talk about bringing it on the right day. The weather sucked - it was raining/snowing/sleeting for about 75% of the race, and the sun came out right as we started heading downhill. All of the stars aligned for that final stretch to be amazing, & it was!

Post run:
We met up with my sister, mom & nephews, who were doing a 5K walk. We walked about another 3-4 miles total hooking up with the crew & retrieving the car, so that served as a nice cool down. 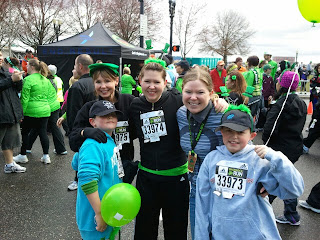 Don't ask why I have that awesome look on my face. I know, super cute. And no, I didn't run the 5K in that outfit. I took a "car shower" (baby wipes) & changed before we met the larger crew.

I may have possibly cried in the bathroom at Deschutes Brewery, because I was just so happy & thrilled with finishing. A year ago, I was trying to complete a 5K, & today was such a milestone. I'm thrilled. I've never considered myself a runner, so this just feels like I'm in new territory. . . And, I'm trying to convince Michael that I should sign up for another 15K at the end of the month. Just because it sounds so fun. :-)

The lunch at Deschutes was amazing - beer, a slice of walnut/pear/goat cheese pizza, part of a cheeseburger, & a little salad, just to health things up a bit. Again, the beer. Yum. Just what was needed after the race.

And, because I can't resist a couple of pictures of Nick's 5th birthday party yesterday . . . 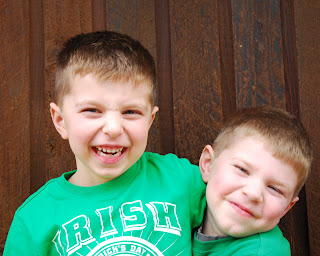 The birthday boy, giddy with anticipation for his party: 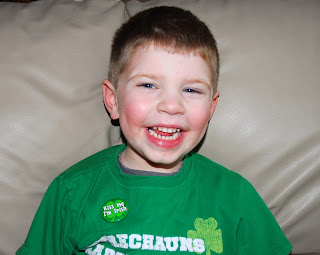 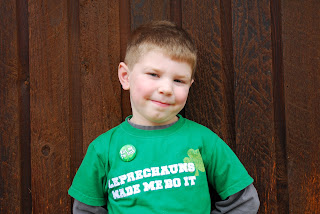 Me with my crazy boys 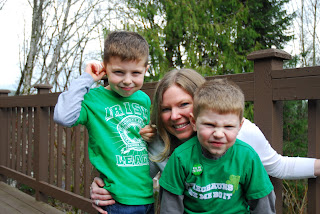 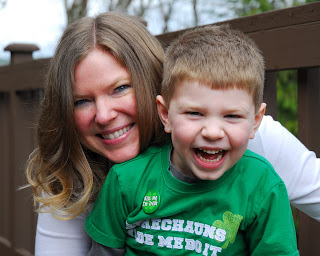 All in all, this weekend rocked!
Now, questions. . . I'm really not sore yet, but my abs are crazy sore? I've never gotten sore abs from running before?﻿ I also got a side ache about half way through the race? Is that generally caused by gulping water too quickly?
How was your St. Patrick's Day??
Posted by Running Girl at 8:07 PM