Where does the time go? I've been sick with some sort of a cold/flu thing, & now I'm starting to panic about falling behind on my training plan. Luckily, I think I can add a week or two due to the race I signed up for, but I'm pretty Type A, and get all stressed out when I can't fit in my scheduled runs. Just ask Michael, who gets to suffer when I can't run.

And, speaking of not running, I had a series of unlucky events that interfered with my running last week:

So, in summary, three of my workouts either sucked or were cancelled due to: water spillage, illness, & the unlikely but true presidential motorcade/secret service. Life was rough. :-)

I did get in a great run on Sunday, thanks to my sister's boyfriend. He convinced me to run & it was the only time I've ever run more than a mile or so with someone. It was nice to have someone to chat with - this reminds me that I really do need to find a running group. As a PSA - I do not recommend two cups of coffee + no water + a bunch of wine the night before as the best pre-run fuel. Yikes.

I've been eating a ridiculous amount of comfort food this week (bagels with peanut butter, grilled cheese, etc) & not a lot of nutritious food. I've also been sleeping twelve hours/day and still want to nap under my desk. This just means that next week is destined to be better, right?! I need to get on the scale, but I'm a little scared. I'm going to force myself tomorrow. 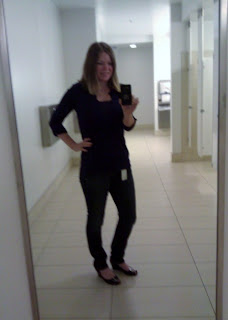 Once again, you can barely see the picture, but here goes.

No lunch time run today due to meetings, but I'm going to run 5 miles tonight. On the treadmill. Hope it's not as painful as I'm envisioning. :-)

With that, what is the most random thing that's interfered with your run?

Have you ever had to add weeks to your training plan? What do you do when your sick & can't run?

And, on to the giveaway!

I'm giving away 10 packs of Clif Shot Blocks (Black Cherry Flavor) + Victoria's Secret body lotion & a lip gloss. Maybe some random other treats thrown in there. All you have to do is be a follower on the blog & comment to tell me any of the above questions, or your favorite long run fuel. I'll pick a winner at random next week!

ETA: Bonus entry - mention this on your blog, & add a comment letting me know for a bonus entry!
Posted by Running Girl at 1:28 PM