I ran 5 miles on the treadmill today, & while I was cooling down, I started crying. Like, serious crying, not just a few small tears. Let me explain. . .

We bought a new car a few weeks ago - a fabulous Audi Q7. It's sparkling & new, & I am a clumsy driver (always hitting the curb & parking too close to other cars, etc), so even though it was intended for me, I haven't driven it yet. My other car is in the shop, so today was my maiden voyage with the new car.

This morning, I walked the boys to the bus stop, and noticed that Sam brought a basketball. Of course, he's not allowed to have a basketball at school (he's in Kindergarten), so I told him to go back & put it in the garage. I stood at the end of the driveway so I could watch our youngest, who was standing at the bus stop, and keep an eye on Sam. He rolled the basketball into the garage, but it got stuck under the Audi. He went to retrieve it, and had his head & arms under the car. At that moment, I realized that Michael was in the car & was going to back it out for me to warm it up, since it's been cold in the mornings. The reverse lights came on, and I was frozen. I started shouting for Sam to move, and freaked him out, he got up & darted the other way behind the car, and at the last second, Michael stopped. The new car has a rear view camera, and when Sam moved, the car started beeping wildly.

On any other day, and Michael would have been backing out our other car (no camera in the back, no beeping if there is an obstacle behind you), and would have had no idea that Sam was behind him. I can't stop crying today. I'm at work, and the tears won't stop. I just keep thinking about how very close it was. So, my PSA for you is to double/triple check when you're pulling out of your own garage or driveway. Michael assumed we were at the bus stop, and I assumed he was in the house.

What I ate yesterday, what I'm wearing, and how I finally managed five miles for the first time in months doesn't really seem very relevant today. I went to the gym at lunch to get my mind off of everything, and it helped. The treadmill is a wonderful thing for erasing all rational thought from your head. . .

This gorgeous boy is turning six in ten days, and I'm so grateful today. 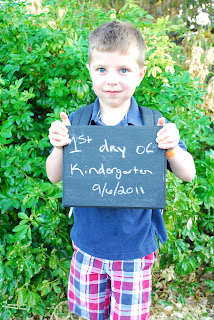