Where to start, where to start. I got asked to join a team the first week in July (one of their runners had an injury and had to drop out). I've been dying to try a relay, & decide to get over my fear & just go for it. Two days in a van with five of your smelliest friends with no sleep? Running 200 miles? Who can resist? :-)

I didn't know any of the other members of the team, save for my sister's boyfriend. I was assigned to the Runner 1 position, which basically means that you are the first person to run down the extremely crazy downhill from Mt. Hood, but it's also the easiest total running position. The second leg is in downtown Portland & totally flat. The third leg was also easy, & Runner 1 runs the least miles of all of the team. I was freaked about the downhill on Mt. Hood, & all of the advice I received was basically - take it slow. Don't shred your legs on that first leg, because you will suffer for the rest of the event.. . . So much easier said than done!

Our relay team, "We've got the runs", had an introductory barbecue the night before the event started. My grandmother passed away the weekend before HTC, & her funeral was on Thursday. I was an emotional mess, & didn't get to attend the barbecue, meaning I'd never seen any of the other runners before. This would prove to be a challenge during one of the handoffs.

I stayed at my sister's house in Vancouver the night before, & set the alarm for 4 am. We had a 10:45 am start time, & needed to: pick up all of the other Van 1 runners, decorate the van, load up, & drive to the mountain. 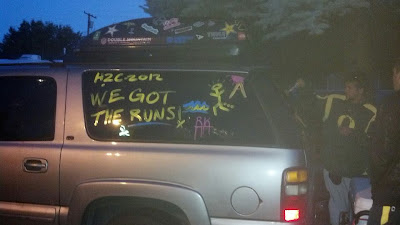 We'd heard horror stories of traffic jams, so we left for the mountain around 6 am. When we got to Timberline Lodge, it was a complete party atmosphere. They were calling out running teams every 15 minutes, & the place was loaded with excited runners. I had a Starbucks spinach/feta wrap at 5:00 am & some coffee, and couldn't decide if I should eat anything else before my first run at 10:45. I decided to have 1/2 of a peanut butter & jelly sandwich around 8:00, & drank all four of my fuel belt bottles filled with Nuun. I wanted to be well hydrated, since it was starting to heat up on the mountain.

Before I knew it, they were calling my team name, & I was lining up. My new BFF van members were cheering me on (seriously, I was with an amazing group & feel so lucky that I had already bonded with people I didn't know a day earlier). My goal for this leg was to try & pick up a few extra minutes, knowing that I would struggle with my legs for my 2nd & 3rd legs. I also wanted to not go full out & hurt my ankles or knees. The adrenaline was pouring on, & I started talking to another girl who was running for the first time. She was awesome & helped calm my nerves.

They counted us down, & we were off! The entire time we were running, I was thinking about my grandmother. She passed away at 94 last Saturday, & was an avid nature lover, & the hardest working, most disciplined person I know. She was way ahead of her time, & I will miss her so much. As I ran, I was thinking of her, & how much she would have loved the view from Timberline. It was breathtaking. This sounds silly & I'm really not the kind of person who believes in this, but I swear that I could feel her with me - telling me that I could do it & just to stay in control & enjoy the experience.

I finished 5.64 miles (and, 2000 ft elevelation drop) in 50:15, which was about 4 minutes under my race pace. I was so happy to see my teammate, Runner 2 (Everett), that I slapped that bracelet on him. I sat down & cried - it was such an emotional experience.

These awesome people totally made it happen for me - everyone was supportive, fun, & we were all first time HTCers. 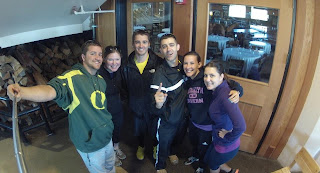 Starting from the left (Nick, my sister's boyfriend, & the only person I knew before the trip), me, Elliot, Everett, Kelly, & Erin. All rock stars.

My second leg, coming up next!
Posted by Running Girl at 8:33 AM