Do you ever get anxious before a long run? If you ask Michael, I'm sure he'll tell you that I get very . . . tense before a long run. I don't walk to talk, I'm mentally preparing, & I don't do well with last minute schedule changes. Which, is kind of silly and unrealistic, given that we have two kids & sometimes you have to go with the flow a bit.

We spent Friday & Saturday at the beach, on the Oregon coast. LOVE that place, but the weather is a bit unpredictable. My training plan called for a 6 miler on Friday, my 12 miler on Saturday, & then Sunday would be a blissful rest day. Of course, on Friday, the wind was blowing 30 mph, it was hailing, & raining all day. I'm from the northwest, & don't mind a little rain, but this was a full on storm. I decided to swap my rest day to Friday, & I'd do my 12 miler on Saturday, followed by my 6 miler on Sunday. Did you get all that? :-)

There was a brief break in the rain on Saturday, & as I mentioned, I was already a bit tense since my schedule was "off". I wasn't quite a mile in when the hail started. Followed by a little sunshine, monsoon like rain, wind, & then a second round of hail. I kept going, and was really pleased by my pace at the half way mark. And then things got crazy. The wind picked up, branches were falling, & the hail was cutting my face. I looked at the Garmin, & had to either add another loop to hit 12 miles, or turn around & head for home. I was just short of 8 miles. I knew Michael would be worried, & honestly, I like to be hardcore, but I'm no masochist.

Don't I just look jazzed that I had to cut it short? Also, there's hail on my face. :-) 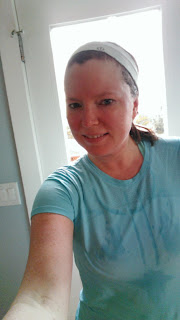 At this point, my long run anxiety was at an all time high. I'd already put in 8 miles on Saturday, which meant doing my 12 miler on Sunday for a 20 mile weekend. . . A lot more than I normally run.

I kept thinking of a comment that Redhead Running made in a previous post - you have to believe to achieve. I got up on Sunday morning (and, because Michael is an amazing guy who gets me, he took the kids skiing by himself) & got myself all ready to do 12 miles. I chose a route that should be pretty similar to my half marathon. (Sadly, I lost that hat on the run. I had to take it off at mile 2, & tucked it into the waist band of my pants. Boo. Good bye, Helly Hansen hat. We've had many fond memories - skiing & running). 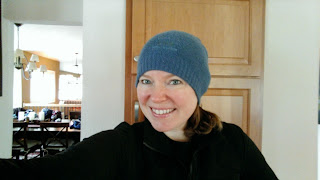 I sat in the car, & kept doubting myself. You're tired. You already did 8 yesterday. It's going to hurt. It might rain. Wow. Then I reminded myself - your husband went through all the effort to give you a kid free morning - don't waste it. I also promised myself that I would sent a Garmin picture to him at the end of the run, which meant I was committed to 12 miles. Too much pride to bail early after all that anxiety. :-)

And you know what? I had my fastest five miles ever. And, my fastest 8 miles ever. And, my fastest 12 miler. Ever. And the entire time, I kept repeating that "You have to believe to achieve." You CAN do this. You are faster & tougher than you give yourself credit for. YOU ROCK. My goal for the run was to finish in under 2:15, which would give me confidence to hit a PR for my half in two weeks. My absolute stretch goal was 2:10. 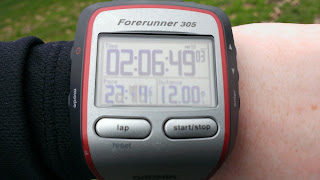 My legs were like bricks for the last mile, but the first 8 were probably the most enjoyable miles I've had in a year or so. Never give up, people, because it's the run that you're not expecting to be great that can really make running fun & take you to places you never thought you'd be. 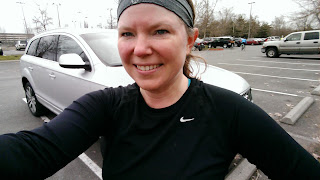 Do you get anxiety before long runs? My stomach was queasy for the rest of the day. I drank & fueled well, so not sure what caused that. I had to force myself to eat. Does that happen to you? Tips? I kept things mostly to basic carbs, which helped.
Posted by Running Girl at 9:01 AM